Parental Warning: a few scenes in Turn may not be
appropriate for younger children and teenagers.

Almost from the moment of its rumored pre-production, I’ve been asked by friends and fans of Courage what I thought about the new Revolutionary War spy series, “Turn” on AMC. A few folks even appear sheepish about it — as though embarrassed to be asking about the competition. That’s flattering, because the rumored budget for this 10 episode series is $32 million, and Courage, well, didn’t have quite that much money to spend. 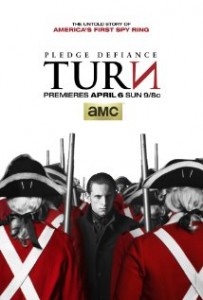 The answer, now that I’ve seen four episodes, is this:  I like it, pretty much without qualification.  If you know me, that’s a rare thing. Quite a few of my friends go out of their way to tell me they find it dull, complicated, and emotionally too cold to draw their attention for very long.

Well, I enjoy a story that just drops me right square into the center of things without much explanation. Whenever I watch a mob movie, I never really know what they mean by “running numbers,” except that it involves gambling and it appears to be dangerous. Similarly, with “Turn” I don’t need to know exactly how this particular colonial farmer, Abe Woodhull (Jamie Bell) got caught in the center of a British occupation, or how the war came specifically to his little township. He’s just right in the middle of it, and that’s where things start.  Fine. 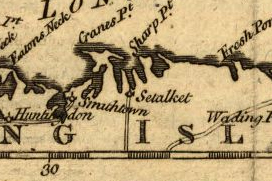 Life’s a bit like that. We walk into a friend’s house for the first time, and we don’t always have a complete biography of every boarder; we figure it out over the course of a few dinner conversations. I don’t mind feeling lost, especially if I’m lost in the 18th century. I love the clothing, and the architecture, and the rural spaces, and, (don’t tell anyone) the way the women look in their bodices. Granted, I may have more patience than most, but I think the story, and the history work.

I also enjoy a story of the American Revolution that is unashamed to recognize the British as the bad guys. They were, after all, morally compromised, fighting for a cause you can tell they had trouble believing.  Now, I have not watched the series to the end, and no villain can be so uniformly villainous you have no sense of their humanity, but there’s enough here, certainly, to hate — and drama thrives on hate.  A dramatic, fictional television series can’t be as neutral as the bloodless academy observer, clucking on about a war that can’t possibly touch him.  Men voluntarily enlist in armies and go to war for a reason. I’m glad the series producers appear to realize that.

It is a bit chilly, emotionally. Jamie Bell is a favorite in our home, for his role as Smike in Nicholas Nicholby. As an actor, he’s capable of enormous vulnerability, and even though he’s playing a war-hardened, world-wise combatant, it wouldn’t hurt to see how much, or if, he cares about something more than just surviving. Keven McNally, playing Abe’s father, keeps it all locked up under the waistcoat as well, and — as a result — the two people we see on the screen the most appear to be behind a block of ice.   When you combine that with Heather Lind’s gorgeous but clandestine Anna Strong and the wonderful creepiness of Burn Gorman (Major Hewlitt), there aren’t many open hearts to embrace.  That may be one of the problems of the spy genre: everyone has to be pretty careful.

When we were pitching Courage, in 2011, we received a nice email from one of AMC’s development executives, indicating our “series doesn’t fit with our current programming plans.”  That’s a tad odd, in retrospect, since they obviously seem to have been developing an 18th century property.   But I’ll be the first to admit that there’s a critical difference between the period before the war and the pitched battles.  Paris in 1937 is a bit different than Paris in 1943; I’ve always been fascinated by the extraordinary love our patriot forefathers had for their little townships.  They loved the peace so much, they were willing to fight to protect it.

We live in a great, though fading republic, and the truth is: we need a lot more of these stories.  We shouldn’t be counting them on one hand.

Next Blog: A Fiesta Siesta