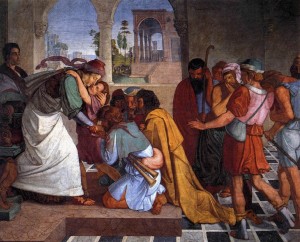 Most everyone in film and television agree on a fairly simple rule:  it’s all about story. Everything else — from wardrobe to sound to score to art direction to cinematography — can be downright breathtaking, but if the story isn’t there, it won’t amount to much.

Still, even if the rule is simple, the reality isn’t.  Almost everything you could ever hope to do, in life, is far more simple than telling a story well.

So you say you have to crawl around under houses and re-connect sewer pipes that are on the verge of breaking?  That’s awful.  You have my admiration and sympathy, but that job — as difficult as it might be —  exists in physical space.  There are established rules.   There are known masters of the trade who can advise in any situation.  It’s tough, to be certain, but success is so certain in that trade you won’t get paid unless it’s done right.

That isn’t the case with storytelling. Lots of people are paid to tell stories on the screen, and decades later, dozens of very smart people can’t decide if the wages were really earned.  Read the reviews of the most recent “Great Gatsby” flick, for example.  David Edelstein concludes “it is unmistakably F. Scott Fitzgerald.”  Steven Rea decides that in all the failed attempts at capturing Gatsby, this is the biggest miss yet.  If you go on to read the other yeas and nays, you see the opinions of people who honestly want to be entertained, who have schooled themselves in the arts, and who walk away with diametrically opposed opinions about the film in question.

Painting a portrait is easier than telling a great story.  You have an objective standard, real world materials, canvas, oil paints, a subject to measure the achievement by.

Brain surgery is FAR easier than telling a great story.  Yes, it takes years of study, followed by rigorous examinations, and, yes, you have the burden of holding someone’s life in your hands, but you’re following procedures.  You’re observing the known science of the time.  You’re using your hands.  You have physical tools.  You have a subject who either wakes up and functions, or slips on into the great beyond.

Almost every trade I can think of is easier than great storytelling: stone masonry, roofing, opera, professional golf, teaching, farming, fire-fighting, even law enforcement. Great story telling is much harder — not because those trades don’t involve sacrifice or danger or hard work, but because, as difficult as they may be to do well, they can be done.  Either the student is taught, or he’s not.  The fire is put out, or it’s not.  The criminal is arrested, or he’s not.

A great story can’t be achieved by virtue of training alone, because a truly great story has a kind of surprise buried in it that can only be called divine.  It comes from another world.  It’s a revelation.   It’s not as simple as starting with a problem (Jack has been diagnosed with cancer), depicting the hero in conflict (Jack wants to commit suicide), showing the hero overcome his problem (Jack is cured, or Jack comes to terms with his struggles).  You could program a computer to do that.

Writers are never really sure if they can beat their last effort, because — whether they acknowledge it or not — only God can deliver a true surprise.