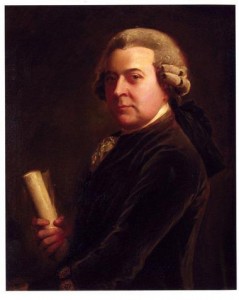 In June of 1771, the travelling attorney, John Adams, then thirty-five years old, had this to record in his journal about a day on the circuit court:

Overtook Judge Cushing in his old curricle and two lean horses, and Dick, his negro, at his right hand, driving the curricle. This is the way of travelling in 1771;— a judge of the circuits, a judge of the superior court, a judge of the King’s bench, common pleas, and exchequer for the Province, travels with a pair of wretched old jades of horses in a wretched old dung-cart of a curricle, and a negro on the same seat with him driving. But we shall have more glorious times anon, when the sterling salaries are ordered out of the revenue, to the judges, &c. as many most ardently wish, and the judges themselves, among the rest, I suppose.

When you’re trying to recreate the cultural life of a day that is, we have to admit, beyond recreation, the check list of questions and interpretations is almost endless:

Stopped at Martin’s, in Lynn, with Judge Cushing; oated and drank a glass of wine, and heard him sigh and groan the sighs and groans of seventy-seven, though he kept active. He conversed in his usual, hinting, insinuating, doubting, scrupling strain.

Which gives us more to ponder:

Rode with King, a deputy sheriff, who came out to meet the judges, into Salem; put up at Goodhue’s. The negro that took my horse soon began to open his heart; — he did not like the people of Salem; wanted to be sold to Captain John Dean, of Boston; he earned two dollars in a forenoon, and did all he could to give satisfaction, but his mistress was cross, and said he did not earn salt to his porridge, &c. and would not find him clothes, &c. Thus I find discontents in all men; — the black thinks his merit rewarded with ingratitude, and so does the white; the black estimates his own worth and the merit of his services higher than anybody else, so does the white. This flattering, fond opinion of himself, is found in every man.

And that makes more work for the research department:

You only need a few sentences from John Adams to percolate a thousand questions.  I haven’t even touched on art direction or costuming.

You could spend a thousand lifetimes, attempting to re-create just the life of one man, on one day in the past.