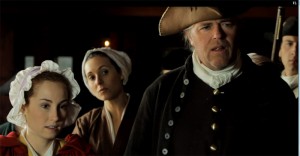 To better understand the life of the common New Hampshire farmer/patriot of the 1770s, we draw heavily on the journals of Samuel Lane and Matthew Patten.   Matthew’s Patten’s “day book” really isnt a diary or a journal in the sense most of us understand.  It’s really a terse record of how he spends his time and where he spends his money.   On that score, neither Patten, nor the rest of his neighbors, had much “money” in the way of coin or paper currency.  Without a central treasury, our colonial ancestors spent a lot of time trading for what they needed, and when they didn’t have something to conclude an even transaction, they extended credit to each other.    Sometimes, this credit went on literally for years, until you had something your neighbor wanted and you could settle the old debt, which might occasion a new line of credit to your neighbor, if the trade wasn’t even.

On the drama and comedy front, I’ve often thought that the permanent departure of a family to a far-away destination might occasion a rapid flurry of debt collection, since trades of this sort were probably difficult to conclude and if everyone was calling their debt in at the same time, someone was bound to be loudly disatisfied with their settlement.   I’ve read quite a bit of Patten’s journal for the period and I haven’t seen such an event chronicled, but I don’t think conjecture would be unreasonable, given the premise.

In the modern era, money makes us strangers.  We don’t really have to buy things from our neighbors, and we certainly don’t have to produce anything, other than cash, that can be used for trade.   Most of us, in fact, scrupulously avoid doing business with friends, since an economic transaction can bruise sensibilities.  The century old violin that you think is worth $2,000 may produce an insulting offer of $75 from a friend who needs a trainer-fiddle for his fifth grader.     The wall-papering job your friend’s nephew describes as “first rate” may make you miserable everytime you walk in your living room.   You can get everything you need, in our age, from strangers — and that way you can yell at them as much as you want and make sure they do their job.

On the other hand, if you were forced into these economic relationships, by virtue of the system itself, my sense is that it might make you more reliable, more aware of how your work was perceived by your neighbors, and, if nothing else, it would force you to get to know your neighbors.   I was a child of the mid 20th century, and I can still remember one of my mother’s friends saying “kids, always guard your good name.  Your parents guarded it.  Now it’s up to you to keep it untarnished.”   I don’t recall hearing any parental lecture of that sort in the last few decades, but in the 18th century, in the small towns of New England, it wasn’t a relic.   Your name kept you alive, and connected to your community.  Sometimes we wonder why we have no collective spirit anymore, no ability to lock arms.  Well, I know one reason:

We don’t have to barter for anything anymore.

So now we review what Matthew Patten was up to.  You can read the actual account here, but here are a few of the  highlights from the Spring and early Summer of 1770: