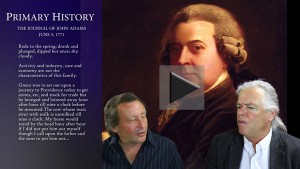 This is the chatty, gossipy, dismissive side of our 2nd president. You’re going to love hearing what he has to say about the John Green family of Stafford Springs, Connecticut.

People pick on John Adams, but he didn’t spring ex nihilo out of the New England mist. America was built, in large part, on the Puritan work ethic, and John Adams lived that ethic so well, even a trip for his health began to wear on him and seem frivolous. (He will call it, later in his journal “an idle jaunt.”) If Yelp had been around, Adams might have made landlords and tavern keepers bolt their doors. He judged a household on four standards: activity, industry, care and economy.

How would you measure up?  How would any of us?

See what John Adams has to say about loungers and slackers and un-milked cows on ColonyBay.TV.

For the paltry price of $17.76, Members get four hours of period drama, two new Courage webisodes, our new “Life of Riley” pilot, and everything we produce for the next 365 days. Join the cause, and the family, today.