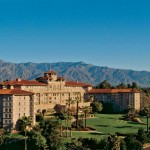 We inadvertently stumbled onto a pretty big industry party the other night.  Mary and I were off to see a friend’s concert and we booked a room at Pasadena’s historic Langham Hotel, and, frankly, we fell into a crowd that was a tad intimidating.  There we were in our three year old Honda CRV, jockeying our way into a long, rude line of traffic for valet parking, and we were surrounded by Lincoln Town Cars, Mercedes, Bentleys, and host of smaller, but politically correct hybrids.

Just ahead to the side of the porte cochere was the familiar Disney/ABC logo and a sign-in desk, teaming with secret-service style security.  I called Mr. Pasadena, Jonathan Wilson, to see if he knew what was happening.

Wilson laughed, but I found it all a shade depressing, as though I had just accidentally jogged past a dinner party to which I had been coveting an invitation. As it turns out, I’ve been battling the flu for the last ten days, and I didn’t even feel up to making the concert, so there I was trapped in a hotel, sick, surrounded by the very sorts of people who actually have the means to bring a television show to the marketplace.  But I had no invitation, and the thought of who would be invited, along with the sorts of new shows that would be pitched, made me feel very close, but still very far, from Emerald City.

My ongoing frustration, of course, is that we have a great show.  We should be at that party.   People like Darrell write:

I sat and watched all four episodes, back to back. Now what! I don’t understand how FOX or FX channels would not pick this up as a series, seriously. I don’t watch a lot of television, but when I do it tends to be hits… Justified, Sons of Anarchy.. This would have a similar capture and success. Great story line and reflects the struggles of the time.. Well done, and great work by the actors and staff too. I’m recommending this everywhere. I wish I had the power or money, I’d fund it myself.

An audience of Darrells has always been the goal, but the traditional way of finding that audience, using the mechanisms of a major studio and a major broadcaster, has always been utterly distasteful, and intimidating, to me. In the very unlikely event I was ever given an audience with Harvey Weinstein, for example, I’m quite sure we would be in a shouting match over politics within five minutes.  And while I’ve always been willing to collaborate on the writing side, if I ever had to take advice from the sort of people who wrote Pan Am, well, it just wouldn’t be pretty.

But, if you can believe me, after what I just wrote, I don’t have any resentment for the way traditional television works.  They are seeking a huge audience.  They have tremendously expensive production methods and they have to pay for lots of rooms at the Langham.   Every new show is “deficited,” meaning they are willing to lose major money to launch a new drama, in the hope that if the show lasts a few seasons, it will all come back.  They have a very broad constituency, and the shows they produce have to have very broad appeal.   I tend to think this makes most of them “consensus” dramas that please everyone just a little and no one very passionately, but I know why this is done.

Now, theoretically, we live in an age where this can all be skirted, where you can just land on an internet site, pay the fee, and watch the show, and, as Darrell proves, sometimes this works.  We have a respectable, subscribing audience, but the ongoing production of the show means we have to have not just a major, but a colossal increase in the number of people willing to see “Colonybay.net” as a channel.

To do that, we need to produce a lot more content, and since we don’t have the money to make hour long episodes on a regular basis, our plan is to fill the site with daily blogs, Courage webisodes (3-5 minutes of the new season, a little bit at a time), historic educational video, and even some satire and comedy.

Off we go.  Who needs an invitation, anyway?