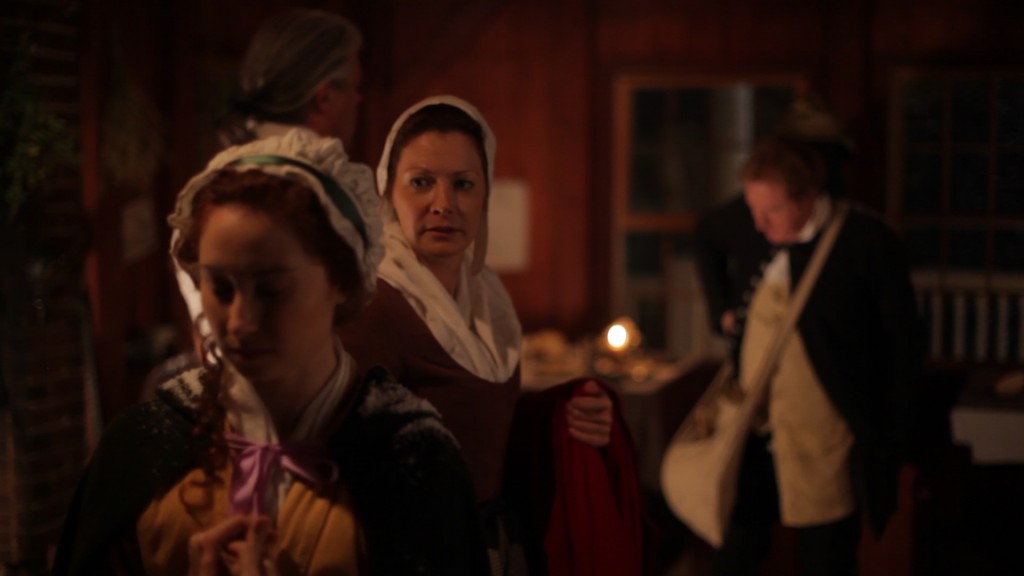 If you’ve been following our posts on Facebook, you know that last week, we called in cast and crew to shoot some second season footage and that we’ve been issuing invitations for crowd funding. Our hard-working director of photography, Drew Ganyer, used three cameras for this last shoot, all hand held, and it made for some really intimate fluid perspectives on what will be a flashback scene with the Pine family (above). 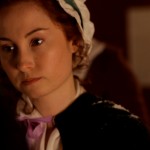 Even though we shot eleven pages of script in about 12 hours, (a very fast pace for us), we wound up generating so much footage, that I spent the better part of last week doing what I would call a “smooth rough cut,” syncing up all the sound and assembling the best takes into one reasonably finished looking scene. A full time editor might have been able to do it faster, but I was anxious to look at the material, and before I knew it — a week had flown by.

Which brings me to both a lesson and a challenge we’re thinking about very carefully around these parts:  In the last five years, visual storytelling has become deceptively easy and cheap.   The cameras and the editing platforms are tremendous bargains by traditional standards.   You can achieve rich, high definition imagery for the price of a $3,000 camera and you can even edit the results on relatively cheap laptop computers. 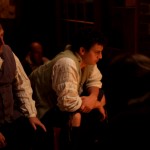 “I hear it told quite differently.”

But playing with light means taping extension cords to the ceiling and screwing in C clamps and draping shades across windows to black out the room and wondering where the drill battery went and building a scaffold for your camera platform and finding a diesel mechanic to repair your generator and tracking down the cheap snow machine you purchased for last year’s winter scene.

It means work, in other words — lots of it, by lots of different people.  And then there is the $8,000 HMI light that is too expensive to buy, but you need it to light up the countryside at night, so you rent it, and someone drives 90 minutes each way to pick it up.   And one of these days, you should buy that $5,000 dolly track, but that’s more than you can spare, so you rent that too.  You have hotel bills for the actors, Costco runs for snacks, new wardrobe to complete, a set of 18th century handcuffs ordered at the last minute and delivered overnight.

Yes, it’s a cheap camera, but there are 55 people standing behind it and five or six in front of it, and even though you’re not delivering a product like shrink-wrapped batteries or a brand new Ford truck with new car smell, this flickering image still costs a great deal of money to produce, even on our small scale.

And that’s where we need your help!  It’s likely that about 100,000 people have seen some or all of Courage, New Hampshire, between our national cable debut, public television, and DVD sales.   A mere $18 second season sale from all of them would fund the entire next season, but, by way of projection, that’s wishful thinking.   We need a few prominent “men of substance” (18th century parlance) to ante up with a tax deductible donation, or a forward thinking American company or foundation to adopt us — as a distinctly quality entertainment brand.

Pray a few of those in for us, Courage Fans.