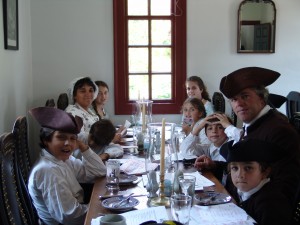 The Riley Family at the Shields Tavern in Williamsburg, Summer 2004

Our fundraising campaign for season II is now in full swing and you can make your tax-deductible donation here. Do it right now before you forget!

Several years ago the producer of The Daily Show with Jon Stewart called and asked if I would appear on the program. This was shortly after Dr. Phil’s producer called and asked the same thing. Our extended family was having a bit of a feud and they wanted us to appear in living history attire and hash out our disagreements on air for the amusement of the audience.

I told Stewart’s producer that I didn’t mind being made fun of, but that I didn’t like the idea of Patrick Henry being ridiculed — however peripherally, as a result of my appearance.   As a rule, I tend to avoid appearing on someone else’s turf.  I’ve learned from reality television producers that they will smile in your face and then cut you to bloody ribbons during editing, so I declined, but something I did last night reminded me of that story.

We’re raising money for our second season and I thought “what if I promise to wear colonial clothing, play a hand of black jack in Las Vegas, and put it on YouTube if we reached $15,000 by midnight?”  I thought the idea was mildly amusing and that fans of the show, and friends, would enjoy watching me try this, but then I got to thinking “wait, this is one of those deals that will start to feel more and more dicey as the taxi drives closer and closer to the bright lights of the strip and I actually have to step out onto a crowded Las Vegas sidewalk wearing tri-corn, neck stock, ruffled shirt, breeches, frock coat, stockings and buckled shoes.

One of the show’s best friends and fans, Lin Wicklund, reminded me on Facebook that it would not be that unusual.  This was Liberace’s town after all.   I didn’t find that comforting.  I began to panic.  “What if we actually DO raise $15,000?”  My wife, Mary, wasn’t really amused either.  My daughter Mallory (“Sally Rhodes”) gave me the eye role that is reserved for fathers when they indulge a flamboyant impulse. 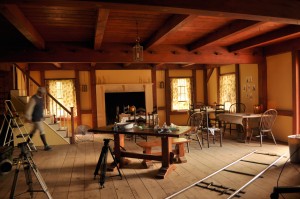 The truth is that I’ve always been a bit of a performance artist for 18th century America. When we were building our business up here, I would wear 18th century clothing almost all the time, and even on family vacations, I would coax and cajole everyone to get into the spirit.   (That’s us at our favorite Williamsburg tavern above, in 2004.)

But Vegas just seemed too garish, too Elvis, for my 18th century heroes, so I was mildly relieved when we didn’t reach $15K by midnight.

But I suppose I should put some of these ideas up for your consideration.  Is there any value in the modern world being asked to confront the past?   If you were to turn the corner on the frozen food aisle and take in the sight of Thomas Jefferson weighing the merits of one brand of mixed stir-fry vegetable versus another, would it be merely an Elvis impersonation or is there potential for something more substantial?   What would Silas Rhodes have to be say about this world we live in?

We will be raising money for some time.  There should be some entertainment value in it for all of you, and hopefully some educational value for our republic.  Your thoughts are welcome.

Next Blog: The Second Season