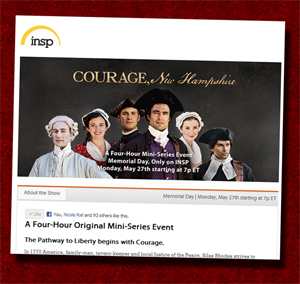 Okay, the fun news we’ve all been waiting to announce..

INSP (Inspiration Network) has a potential reach of 73 million viewers and their goal is the same as ours — produce more original period drama.  According to INSP Senior Programming vice president Doug Butts, “The series was written using stories painstakingly derived from historical documents and personal letters. The dedication and attention to detail by Jim, his cast and crew have resulted in one of the highest quality productions on this topic I’ve ever seen.”

We’re excited to build our audience and lay the groundwork for more period drama.  Let your friends know, and by all means have them take a look at the network’s new trailer:

Next Blog: A Cable For You II