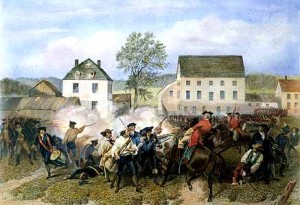 When we look back on the great accomplishments of the late 18th century — embattled farmers standing their ground at Lexington and Concord, the timeless language of the Declaration, the homage the centuries have paid to the Bill of Rights — we tend to see the victories and not the character of the people who achieved them.

We know they won, but we rarely study how or why.

If we found ourselves somewhere in New England on a Sabbath morning, in 1771, even the most devout among us might find the traditions strange.   No one worked.   Travel itself was frowned upon — the mark of a Godless stranger, someone without covenant.   On a day of fasting and public repentance, anyone who did work, was considered with suspicion.   The justice of the peace would issue fines for a profane oath.

On the other hand, rum was considered something like medicine, a necessity, and hard cider, 20 proof or greater, was consumed with relish.   Courtship was both more holy and  more frank and more real than it is today.  Some families still followed the tradition of “bundling,” wrapping the young couple in blankets, for an embrace that may have been chaste in most cases, abandoned in others, but in every case a solemn step towards marriage.

They liked to dance, sing, and celebrate.  They published their toasts in the newspapers.

They had a much harder line in the sand than we do today.  Rapists were executed.  Burglars were branded.   Counterfeiters were hanged.

On the frontier, the brutal task of clearing the forest created a sturdy band of young farmers who, plainly, were stronger than their British cousins.  What they lacked in capital, they made up in callouses.   Ask Johnny Burgoyne about that.

Who were these people?   What did they value?  What was on their hearts?  What made them strong enough to fight?

Help us find out.

Some truths are worth re-examining.