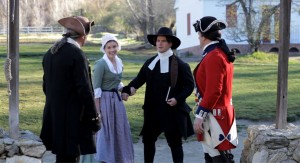 I don’t agree with every political and cultural point being made in all of these shows, but I have a prediction to make about the art at the center of them all.   In our own age, we see them as “pop,” but I believe, within five or six decades, they will be seen as art forms rivaling the short story and the feature film.      When you think about either a short story or feature film, they are terribly “contained.”   They don’t survive sequel very well.   The shark, in Jaws can only eat so many people.  The Graduate’s “Ben” can only be the victim of so much absurd parental commentary.  Even that greatest feature of all time, for me, It’s a Wonderful Life would suffer if you tried to add anything to it.   It was perfect, as is.

Feature films, and short stories, are meant for one sitting.   They can be powerful, but they are short-lived.

Novels, and mini-series, and multi-year television dramas, on the other hand, are more like life—like your friends’ lives.  You check in on them every so often and catch up, and you look forward to seeing them, or you don’t, but in any event your investment is long term.   You may disagree, but on that score, the BBC Colin Firth version of Pride and Prejudice was far more powerful than the feature film version with Keira Knightley.    After you’ve seen someone stretch out with Jane Austen, across a few different evenings, the feature film version, well, it seems like a sketch, or a mock-up, of the real thing.

At the very beginning of the Courage story, it may seem preposterous to imagine seasons stretching across a decade or more, but you have to dream, or the waking hours start looking a little flat.   So simply put, on the story side, the dream would be to see characters from a single township live the years up to and through the Revolution, and even beyond, perhaps, say, all the way through to the War of 1812?   Or maybe the Civil War?  The first 95 season television drama?

On the physical plain, the story is very much rooted in its “backlot”— Riley’s Farm in Oak Glen, California.   I see colonial buildings going up, as per our original plan, to service both the needs of the visiting public and the filming crew.   There would be a New England meeting house, a village street, a broad stretch of cultivated farm land, a cider house, a weaver’s shop, a saddlemaker, a chandler, a few cottages for the actors and guests to stay overnight, and — hidden away somewhere — a sound stage to hammer out all the magic.

But the best part of the dream is one a fellow businessman confessed to me a few nights ago.  He put it this way:  “I do okay, financially, but really, I started my own shop to give my children and friends a place to work.   That’s the greatest blessing of having a family business.”

For me, the dream would be seeing my grandchildren setting up a camera somewhere, debating angles.

Next Blog: Why Big Studios Would Never Make ‘Courage’