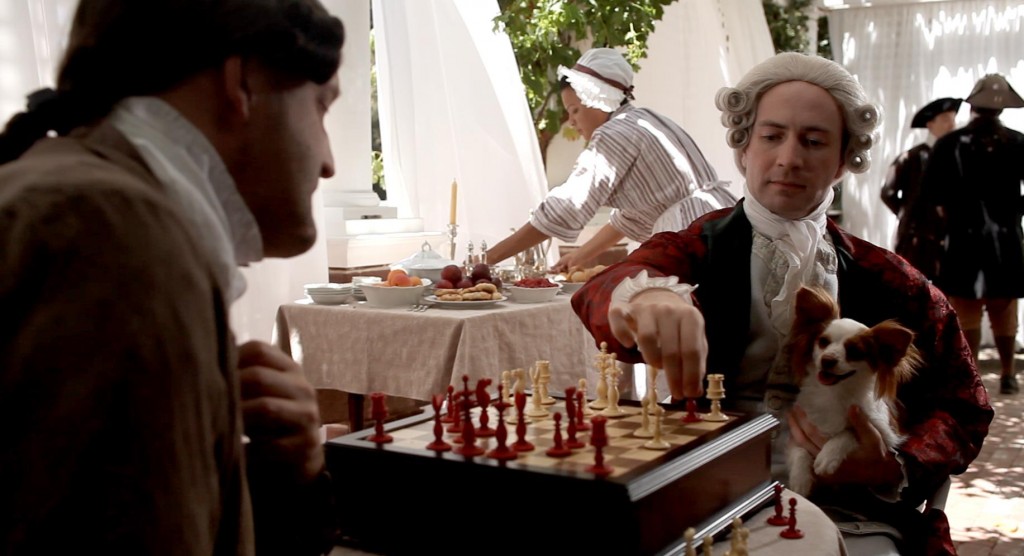 You can see me in the background, serving the Governor and his guests.

Whew! What a week. These past few days have been crazy. We finally have a little bit of a break from shooting.

With only two days left of filming Episode 4, I have my work cut out for me! I still have to get a lot of “behind-the-scenes” interviews for you guys!

In any case, please pardon my delay between posts.  As promised, I had time to sit and chat with Mary Johns who is the costumer for “Courage, New Hampshire.” She has her two sisters, Abby and Anna, who also work with her as assistant costumers.

This past Saturday, “Courage” had one of its biggest production days!

Mary and Anna, were busy dressing all of the extras and cast, and they were able to do so flawlessly!

However, before I get ahead of myself, I wanted to tell each of you about my walk-on role experience as a “servant girl.”

I was able to be in a scene, with two of my favorite characters:  “Bill Krepps,” Jim Tavare, and “Governor. John Wentworth,” Napoleon Ryan.

It was so cool to have this type of experience…

So my day as a “servant girl” started with my normal morning routine: eating a nice healthy breakfast and checking our “Courage, New Hampshire’s” Facebook page.

In the first few minutes of getting into my costume, and what I came to find out, is that, yes, getting dressed in 18th century clothing, is a process, indeed!

Thank goodness, Anna has dressed me for the day. She helped me put on my “shift,” which is kind of like a long, white nightgown. She then, helped me place the dreaded “stays” on around my waist. For those of you who don’t know, stays, are likened to corsets.

However, unlike a corset, the stays of the 18th century, “did much more to support the body and remind one of good posture than they did to cinch the waist.” (Source: www.history.org.)  This aspect of 18th century dress, may be the least appealing to women everywhere.

Once I had my shift and stays on, I put my stockings and shoes on—easy enough.

Anna picked out two petticoats, draped a *bedjacket around my shoulders, which she tied with an apron, which shaped my waist and acted as a fashion accessory, placed a blue neckerchief around my neck, and I was finished.

*Bedjackets acted as an outer garment and were traditionally worn by American and British working female class during the 18th and 19th century.

After shifting around a bit in my “colonials” and feeling a bit awkward, I headed down to the hair and make-up trailer.

Hannah Riley, my sister-in-law, has been dying to do my make-up since like forever, and her dream finally came true! Hannah applied my make-up very light and natural looking.

Hannah is still not finished, when a call comes through, informing all of us, that I need to be on set in 5 minutes.

Loretta Lewis, my mother-in-law, heads over and proceeds to do my hair. After brushing and stylizing my hair, she places the cap that covers most of my head. She then ties a wine-colored ribbon to secure the cap.

(In the 18th century the cap was a practical piece for women and girls. It protected their hair from dirt and dust.)

With that, I am off to do my scene, which pretty much consists of me waiting on cue, picking up a tray, and crossing the camera, to add “scenery” to the take.

As I returned my clothes back to wardrobe and slip back into my jeans again, I see Mary working on folding a tricorne hat.  I took this opportunity to sit down and talk to Mary Johns about her costumes.

“I think my favorite part of working on “Courage, New Hampshire” is being able to design colonial clothes,” said Mary. “I really enjoy the 18th century clothing.”

Certainly, Mary identified some challenges, in designing a wardrobe, for a period drama.

“The hardest thing for me is that everything has to be done on time, and it usually is a pressing time frame,” Mary said. “Likewise, we have to make sure we have continuity in the costumes from episode to episode.”

She then explained her process to me.

“Once I get the script, I have to go through it,” Mary said. “I can then decide what type of fabric is needed to be ordered for each character, according to each scene. Featured extras, and extras are the most challenging to dress as they are not always here on set. For example, in this episode, we had to make, what felt like, 100 tricornes for all the male actors.”

It is quite evident how hard Mary works and her efforts are not slighted by the cast or crew of “Courage, New Hampshire.”  She told me that she did have a favorite costume. 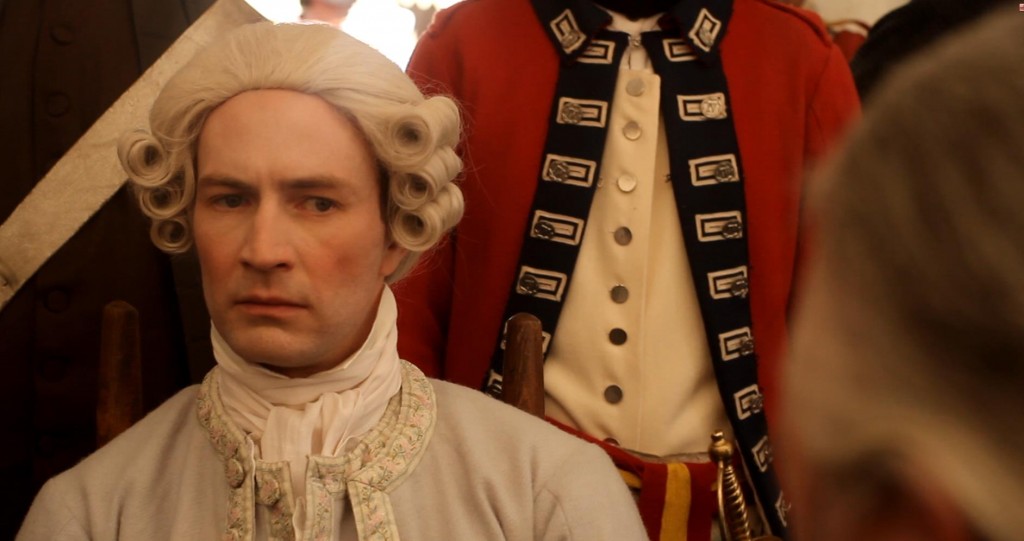 “I have been having so much fun designing all of his costumes,” Mary said. “One particular costume, [above] is a direct inspiration from his actual portrait. His costumes are my favorite.” 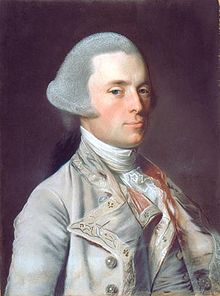 The "real" Governor Wentworth. Napoleon's costume is a direct replication of the "real" thing!

Before I let Mary continue her tricorne hat making, I had to ask her to address the issue of “psudeoprops,” as one of our fans had seen a video, in which, Jim Tavare is seen unwrapping toilet paper from his neck as a sort of make-shift cravat or neck cloth. (Watch video.)

“No, we don’t use any pseudoprops, unless you count cardboard stays, as a faux prop! Every costume you see is hand-sewn and hand-washed,” Mary said. “Jim Tavare is just making a joke in this video!”

In my next post, I will chat it up with art direction!

Until then, be Courageous and pre-order Episode 4  today!

It’s slated to be “Courage, New Hampshire’s” best episode yet.

Next Blog: The first 12 Days of the Shoot